A Message from Father Francis Maple 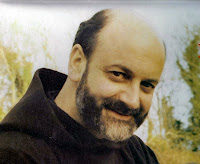 And have yourself a ball!
(Victor S E Moubarak)