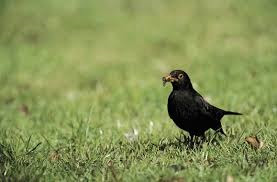 I learnt a valuable lesson from nature the other day.

I was watching out of the window into our garden. It had just stopped raining. Two blackbirds were there on the grass. They were pecking the ground with their beaks. Suddenly one of them found a worm. It was a big worm. He picked it up and moved a few feet away.

The other blackbird noticed him and followed him.

The first bird hopped away a few more feet, worm still in beak. The other followed again.

This went on a few more times for about ten feet or so.

Eventually, the first bird flew away with the worm still in its beak.

The second bird remained behind pecking the ground. Eventually, he too found a worm and flew away with it.


And the lesson I learnt from all this:
DON'T WASTE TIME LOOKING AT BIRDS
Posted by Victor S E Moubarak at 00:43:00

Email ThisBlogThis!Share to TwitterShare to FacebookShare to Pinterest
Labels: Blackbirds