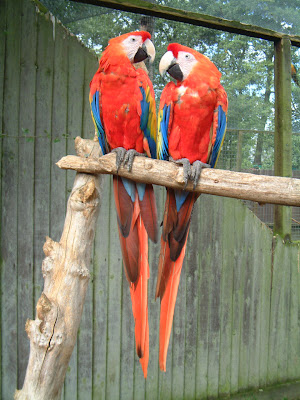 The other day I went with friends to an exotic restaurant where they serve what they call "exotic meats". Crocodile, kangaroo, wild buffalo and hog, ostrich, that sort of thing. Not my sort of cuisine personally. I decided to have a stew made with beef meat.

After I finished eating it I discovered when we received the bill that, due to a mistake in the kitchen, I had been served the more expensive stew made with parrots.

I was livid. I was livid, I tell you. Livid is the word for it.

Sometimes when I burp I spit out multi-coloured feathers.

I've even started preening myself, would you believe? I raise my arms and try to clean myself like a bird.

Also, whenever I see myself in a mirror I say, "Who's a pretty boy then?"

This is all very terrible. Terrible I say. Livid. Livid, that's what I am. Terribly livid. Lividly terrible.
Posted by Victor S E Moubarak at 01:48:00