The Wall of Jericho 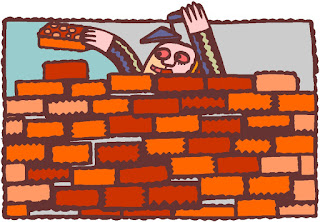 Once upon a time a newly appointed Religious Instructions teacher at a school asked her class "Who broke down the wall of Jericho?"

Tom sitting up front said "It was not me, Miss!"

The teacher was so appalled at the level of ignorance of her new class, that she reported the incident to the Head Teacher.

The Head Teacher took the matter seriously and asked Tom's parents to attend the school for an explanation. He told them what Tom had said and asked them if they had anything to add. Tom's mother burst out crying and said "My Tom is a good boy. He never lies. If he said he never did it then I believe him!"

The Head Teacher was furious and turned to Tom's father.

Tom's father was more pragmatic about it all. He said "Let's treat this whole thing like grown-ups shall we? You get the wall fixed and I shall pay the costs involved."

When the parents had left, the Head Teacher called the Religious Instructions teacher, to explain what had happened.

She said "Really? Is that what Tom's father suggested?"

"Yes," replied the Head Teacher, "let's get a builder in to fix the wall quickly before he changes his mind!"

Personally ... I think the father was too hasty to offer to pay the costs without knowing how much it would be.

Email ThisBlogThis!Share to TwitterShare to FacebookShare to Pinterest
Labels: the wall of jericho

And have yourself a ball!
(Victor S E Moubarak)